The meeting location has changed, the meeting will be held in the Niskayuna High School South Cafeteria. This room is “right around the corner” from the Little Theater.

A Few Words from Your ARRL Hudson Division Director

Mike will discuss current issues in amateur radio that affect all hams–hot topics like new legislative issues, changes in ARRL leadership, band allocations, the dues increase(!), and many more.

In 2014, as the ARRL celebrated its 100th birthday, Mike celebrated 20 years as a ham!  He was first licensed as a Tech Plus in 1994 and moved up the ladder to General, then Advanced and finally to Extra a number of years ago.

Mike is a firm believer in giving back to amateur radio—on January 1, 2013, he became the Director for the ARRL Hudson Division. For the four years prior, he served as the Section Manager for the ARRL New York City/Long Island Section. He has also served as the NLI Section ARES Section Emergency Coordinator, as the Assistant Section Manager, and as the ARES District Emergency Coordinator for New York City. In his role as ARES DEC, he was charged with rebuilding an organization that had nearly self-destructed. In recognition of that achievement, he received the ARRL Hudson Division “Amateur of the Year” award in 2004.

Mike has served as the RACES Radio Officer for the City of New York, appointed by the Commissioner of the New York City Office of Emergency Management. He has been a moderator at Ham Radio University (HRU)–the NLI Section Convention–for the past 11 years. He has also been a mentor/instructor for the EC-001 course, leading in-house courses for New York City District ARES. He is a Volunteer Examiner (VE) for the ARRL and a SKYWARN spotter as well.

As to the “hobby” side of amateur radio, Mike is an avid DXer, a member of the Long Island DX Association (LIDXA), The Order of Boiled Owls, and the Yankee Clipper Contest Club (YCCC). He is a former Vice President of the Kings County Radio Club. He holds 5 Band DXCC and DXCC in Mixed Mode, Phone, CW and RTTY. He has the WAS, WAC, VUCC, CQ WAZ, DXCC Challenge, the Diamond DXCC Challenge, and the ARRL Triple Play Award (#53). He is also a member of the A-1 Operator’s Club.

Mike is a professional actor and has appeared in countless films, TV shows and commercials over the past 30 years. He is married, has two children and lives in Brooklyn where he grows antennas in his backyard farm. 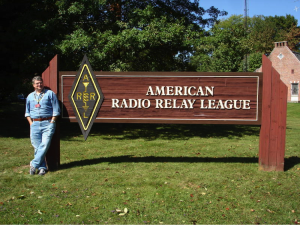 If Niskayuna High School cancels evening classes and activities, the SARA meeting will normally be cancelled and possibly rescheduled. Listen to the SARA 147.060 repeater for meeting status information and whether the meeting will be rescheduled.

SARA meetings are generally held in the Little Theatre of the Niskayuna High School on Balltown Road unless otherwise noted. Attendees should enter the school through the cafeteria entrance located on the side of the school, adjacent to the Nott Street Extension school parking lot.